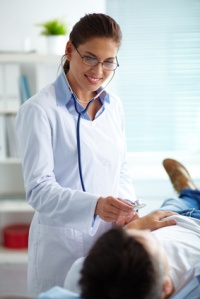 A case example: It is Saturday evening at a large prison that houses medium and maximum security men. The facility medical department is staffed twenty four hours a day seven days a week with both registered and licensed practical nurses. It has a twelve bed infirmary and two providers are on site Monday through Friday and rotate call each week. At 7:30 pm a nurse is called to assess an inmate who has been assaulted in the gym. He has a bruise next to his left eye, a small laceration on his left forehead and another on his scalp (left). He reports no loss of consciousness. The injuries are treated and he is cleared to return to housing. At 10:30 pm nursing is called again because the inmate is lying in his segregation cell and is not responsive to verbal inquiry by the correctional officers. The inmate is shaking and his verbal response to the nurse during the assessment is slow; he complains of a headache. His vital signs are T= 95.6, P = 106, and BP = 166/94.

This case is a good example of the kind of situation correctional nurses face and the clinical judgments they are required to make. Nurses are the first health care professional an inmate is likely to see when they have a medical problem and it is the nurse who will determine the inmate’s subsequent access to care. In this case the nurse’s initial assessment and resulting decisions had a deadly impact on the inmate. It is not just the vital signs themselves but the interpretation and synthesis of this data in the context of the particular circumstances of the patient that define the practice of nursing. Clearly the inmate’s vital signs are abnormal at 10:30 pm after being found lying, unresponsive, on the floor of his cell. Can you explain what is going on physiologically with this inmate? What do you think his vital signs would have been at the time of the nurse’s initial assessment and what do you think they would have been an hour later? Can you explain why?

Body temperature is the difference between the amount of heat produced as a byproduct of metabolism and the amount of heat lost. The hypothalamus is the control point that maintains our body temperature between 96.8°F and 100.4°F. The body reduces core temperature by sweating, vasodilation and inhibiting heat production. Vasoconstriction and shivering increase or preserve core temperature. Heat loss is controlled by radiation, conduction, convection, and evaporation. The skin provides insulation, senses temperature and is the site of vasoconstriction or dilation. Factors affecting body temperature include age but also exercise, hormones, time of day, stress and the environment.

Higher than normal temperatures can be the result of excessive heat production as in infection and/or the inability to promote heat loss. For example in hot weather the elderly, and those with cardiovascular disease, diabetes, alcoholism, hypothyroid conditions as well as those who take certain medications are less able to rely on the hypothalamus to produce heat loss and so are at greater risk of heat stroke when environmental temperatures are high. Diaphoresis which promotes heat loss by evaporation can result in dehydration and electrolyte imbalance from a deficit in fluid volume. Lower than normal temperatures result from the inability to control heat loss and/or the body’s ability to produce heat is overwhelmed (Fetzer 2013, Rathbun & Ruth-Sahd 2009). The patient’s low temperature in the case example is most likely related to his head injury and an inability to control heat loss.

Respiration is the body’s mechanism to exchange oxygen and carbon dioxide between the atmosphere, blood and cells and involves three processes:

Respiratory control lies in the brain and responds to levels carbon dioxide, oxygen and the pH level in the arterial blood by changing the rate of ventilation. Ventilation also requires muscular effort to move the diaphragm, abdominal organs and rib cage so that air moves into and out of the lungs.

Respiration is easiest vital sign to take but least likely to be assessed and yet is the most sensitive and earliest indicator of an impending adverse event (Chua et al. 2013, Elliott & Coventry 2012). Consistent with this finding, the nurses in the case example did not assess the inmate’s respirations. Given the description of the incident what effect do you think there would be on the inmate’s respirations and why?

Pulse is the rhythmic flow of blood pushed into the peripheral artery caused by the contraction and relaxation of the heart. It provides information about cardiac output including:

A normal pulse rate for adults is 60 to 100 beats per minute and for adolescents is 60 to 90 beats per minute (Fetzer 2013). Mechanical, neural and chemical factors regulate the heart’s contraction and flow of blood. Cardiac output is affected by hemorrhage and dehydration but also by coronary artery disease, pulmonary disease and diseases of the heart valves (Archer 2013). Heart rate will adjust to maintain cardiac output but only to an upper limit of 140-150 beats per minute (Dickenson E.T. & Lozada K.N. 2010). Conduction (heart rate) is affected by ischemia, abnormal heart valves, anxiety, drugs, caffeine, alcohol, tobacco, electrolyte and acid-base imbalances. Heart rate will be higher during exercise, pregnancy, and with fever (Archer 2013). The heart rate in the elderly is slower to change in response to cardiac output (Fetzer 2013).

In the case example the inmate’s pulse was 106 beats per minute, which is high. It is hard to judge the significance of the finding because we don’t know to what extent this is a change from his baseline vital signs or when he was first evaluated earlier in the evening. This rate could reflect hemorrhage but it could also be an outcome of head injury.

Blood pressure reflects the hemodynamic variables that maintain blood flow and oxygenation in the body. The systolic blood pressure reading is the point at which the ventricles contract and blood is ejected into the aorta at the highest pressure. The diastolic reading is the moment that the ventricles relax and the artery wall is at the lowest pressure. Cardiac output, peripheral resistance, blood volume, blood viscosity and elasticity of vessel walls all affect each other and ultimately affect blood pressure (Fetzer 2013).

Normal blood pressure for adults is considered 120/80 mm Hg and for adolescents 14 to 17 years of age normal is 119/75 mm Hg. Knowing the patient’s usual blood pressure is helpful in identifying if the problem is chronic or acute in nature. Factors that influence blood pressure include age, stress, ethnicity, gender, medications, activity level, weight and smoking.

Additional steps to be taken with abnormal readings steps include finding out the patient’s usual blood pressure and considering whether the blood pressure was taken incorrectly. Other possible causes for high or low blood pressure are listed in the table below.

The patient’s blood pressure in the case example were elevated (166/94) but we don’t know if he has hypertension that has been untreated or poorly controlled. This blood pressure in the context of rapid pulse, hypothermia and his subjective complaint of a headache three hours after an assault make traumatic injury a strong possibility. A CT scan done at the hospital showed a subdural hematoma.

Because the body has so many mechanisms to maintain homeostasis a full set of vital signs and serial readings will provide more information about the patient’s condition than a single vital sign or a single set of readings. When vital signs are considered a task, rather than a tool, simply collecting the information is sufficient. Nurses who use vital signs as a tool, integrate the information with other information they have about the patient, interpret their meaning and develop a plan that takes into account the likely scenarios that may take place. An essential step in nursing process is the evaluation and reassessment of a patient’s condition so that the plan of care can be adjusted to prevent harm and promote healing (ANA 2013).

For more on the professional practice of nursing in the correctional setting get a copy of our book Essentials of Correctional Nursing. If you order directly from the publisher you can get $15 off and free shipping. Use code AF1209.

One thought on “Vital Signs: Interpretation and Synthesis”